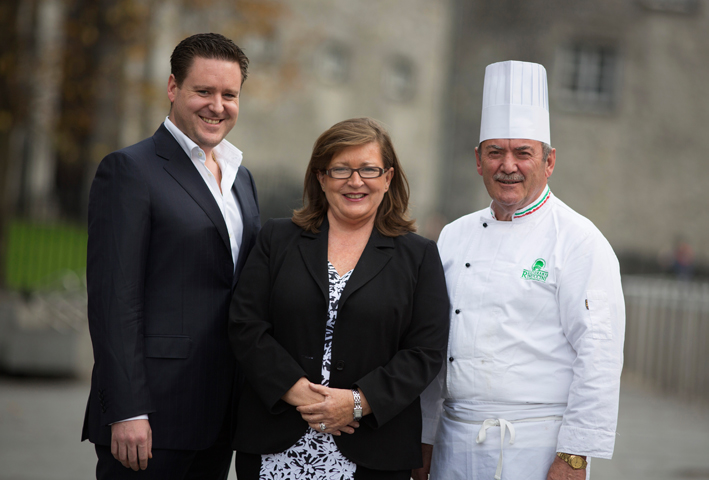 Ristorante Rinuccini is a family owned and run multi award-winning Italian restaurant located in the heart of Kilkenny City for almost 30 years.

Ristorante Rinuccini takes its name from Giovanni Battista Rinuccini, a Florentine noble who spent four years living amongst the people of Kilkenny in the mid-seventeenth century. While in Kilkenny, he was held in great respect by the laity and clergy alike, for his refinement and patronage of the arts and fine food.

Rinuccini was reported to have coined the phrase ‘Tavola quattro chiacchiere gusto da tradizione Italiana’ while he was living in Kilkenny, which translates to ‘At the table conversation is an Italian tradition’. We try to deliver this sentiment with every meal and to live up to the Rinuccini name each day.

Experience our history and immerse yourself in the culture of Rinuccini by dining with us in our Kilkenny city restaurant.

Food and family are at the heart of Italian culture and at the heart of Ristorante Rinuccini. Antonio Cavaliere came to Ireland from Lazio aged 15. He served his apprenticeship under the classically trained chef, Bernardino Gentile, at Quo Vadis in Dublin, one of the first and most influential Italian restaurants then in Ireland. It was there that he met and and later married a charismatic Irish woman, restaurant manager, Marion Power.

Antonio and Marion opened their first restaurant together in Portlaoise in the mid-seventies and in 1989 they fulfilled their lifelong dream and opened Ristorante Rinuccini, Kilkenny’s first Italian restaurant, opposite the city’s medieval Castle and at the start of what is now the Medieval Mile.

Antonio has gained many accolades, including ‘Chef of the Year’ and under this guidance and vision we have been listed in the Michelin Guide since 1994. He has also received acknowledgments from the McKenna Guide, Georgina Campbell and Lucinda O’Sullivan.

Antonio was selected to become a member of Good Food Ireland for this commitment to sourcing the very highest quality local and Irish produce. He also sources his own wines and many of his Italian ingredients, including salumi, cheese and extra virgin olive oil from select vineyards and artisan producers from his native Italy.

Like all Italian families, the Cavalieres are full of passion and that passion – for fine cuisine – continues to the next generation, with Antonio and Marion’s son Riccardo and his wife Orla carrying on this strong family tradition and continuing their legacy.

“Rinuccini is an intoxicating delight.”